We present here the whole press release of CJM concerning criminal complaint against BDS leaders that may be of interest to you:

BDS movement leaders responsible for the boycott and harassment of singer Matisyahu in the Summer of 2015 are placed in the dock charged with incitement to hatred and discrimination against the artist.
*****
The Examining Court number 19 of Valencia has admitted into procedure the criminal complaint filed by Human Rights and counter-antisemitism lawyers against the BDS movement.
*****
The defendants from this movement close to the Podemos radical left party face jail terms of up to 4 years

*****
In the summer of 2015, Spain suffered an anti-Semitic incident that was reported in the national and world media: the BDS (Boycott, Divestment, and Sanctions against Israel) movement attempted to force the organizers of the Rototom music festival in Benicassim to cancel the invitation previously made to singer Matisyahu. The reason was that the singer is Jewish and the BDS tries to prevent Jews of any nationality (Matisyahu is not Israeli, but American) from supporting the State of Israel, the Jewish state.
When their direct pressure on the organizers failed, the leaders of the movement arranged a campaign of harassment and intimidation in social networks that, while insulting and denigrating the artist, demanded his expulsion from the festival.
At first, the concert organizers conceded and asked the singer to publicly denounce Israel. Matisyahu was the only singer who was required to openly declare his political position in order to sing. No other guest was asked to make a statement on any matter, nor to explain his opinions. The Jewish singer refused to be discriminated against and canceled his performance.
Public opinion, the media and the democratic political parties reacted to the grievance and, responding to the general call, the organizers rectified and reinvited Matisyahu.
Finally, the singer performed under massive security measures, with incidents throughout the concert and in an atmosphere of hostility orchestrated by the BDS movement. Juan Carlos Monedero, a former leader of Podemos, who is a staunch supporter of the BDS movement, was present at the show. According to the artist’s own account in the media, Matisyahufelt threatened during the concert and even had to dodge bottles hurled at him.
A few months ago, Matisyahulaunched a new song called «Dodging Bullets», which metaphorically equates the aggressions inflicted upon him by the defendants to the firing of bullets, from which he had to be protected.
The BDS movement carries out internationally coordinated economic warfare against Israel, promoting a boycott that targets its citizens, its companies, its artists and universities, and anyone they consider close to Israel.
According to the President of the Jewish Community of Madrid, David Hatchwell, «with this deplorable episode the BDS removed its mask: the goal of that movement is not a two state solution. Or the improvement of the Palestians’ lives. The real goal is to ostracise the Jews and criminalise defending a Jewish State and its right to exist. The objective is denying the Jews their own vibrant and diverse democracy. The BDS movement, as all antisemites, aims to condemn the Jews to the role of helpless victims that was sadly reserved to them through history. If the destruction of Israel is the goal, the criminalisation of all its supporters is the means, excluding them  from civic, political or economic life, driving them out of Spain… but with no Israel to go.
«BDS militants», says Hatchwell, «are used to getting away with their racist goals and violent methods. No one holds them accountable for actions that, carried out against any other ethnic or religious minority, would be shocking and punishable. A civil society that can resort to the rule of law to protect itself from bullying and cowardly abuses, both in the social networks and the real world, demonstrates its maturity».
Convinced of the need to end impunity for criminal acts of this nature, the lawyers of the «Legal Committee Against Discrimination», mainly engaging in combating Antisemitism, have sued the leaders of the so-called BDS Pais Valencia and BDS Catalunya, whose real identities they managed to discover even though they were hidden behind pseudonyms on Twitter.
Nine persons in charge of this movement have been prosecuted and the Examining Court number 19 of Valencia has admitted into procedure the criminal complaint in light of the seriousness of the well documented charges. Their names are, among others, Jorge Ramos Tolosa, Blanca Castera Molada, Carlos Marcos Pita, Irene Esteban Molina, Immaculate Milan Giner, Bernat Sorinas Gimenez, Jorge Sanchez Jimenez and Pau Fabregat Bernal.
The BDS movement has a long history of confrontations with Justice. In the last year, up to ten different courts from Spain have overruled the Anti-Semitic boycott motions approved in Spanish municipalities following BDS initiatives. But so far there have been no criminal consequences for deplorable acts of this kind.
«We are convinced», says David Hatchwell, «that this time the violent instigators of these Anti-Semitic campaigns will suffer criminal consequences for their actions.» 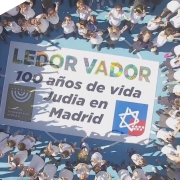