After last week’s public denouncement by ACOM, the University of Santiago de Compostela has cancelled its academic programme of the course “Auschwitz/Gaza. A testing ground for comparative literature”, organised by the Faculty of Philosophy of said university.

The iconography and main theme of the programme established, and not by coincidence, a correspondence between Gaza, an area controlled by Hamas, a jihadist organisation that subjects its population to a regime of terror, and the Auschwitz extermination camp. They did not choose any other place or event, but precisely the location where more than a million people were murdered, with the intention of criminalising, dehumanising, and questioning the legitimacy of Israel, looking to extend a similarity between the Jewish State and Nazi Germany, a behaviour defined as anti-Semitic in the IHRA Declaration officially adopted by Spain.

We celebrate that the University has rectified, eliminating from its academic offer a course designed only from the utmost clumsiness, fierce sectarianism, and a shameless sense of impunity, a true enormity that trivialises the Holocaust, even awarding academic credits for it.

Unfortunately, it is another example of how in certain Spanish universities courses of anti-Israeli propaganda and agit prop are passed off as academic content. A crass manipulation that will always be challenged by ACOM, organisation of reference in Spain against anti-Semitism. 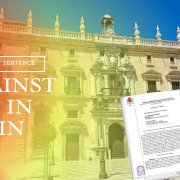 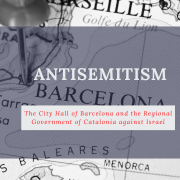