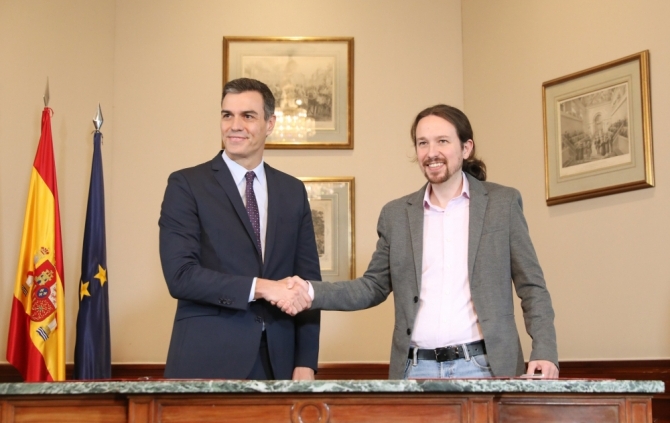 ACOM – Action and Communication on the Middle East, the reference organization in Spain in the fight against ant-Semitism, manifests its deep concern for the agreement reached in Spain between the Socialist Party and Unidas Podemos. In said coalition government the Vice-President would be Pablo Iglesias, leader of the Chavist and Pro-Iran party Podemos.

It is absolutely irresponsible, unacceptable and dangerous on behalf of PSOE, and very especially its General Secretary and acting Prime Minister, Pedro Sánchez, to integrate in the government of the nation a clearly anti-Semite party that has promoted from its inception a campaign of hatred and discrimination against the Jews and that maintains active and evident links with a jihadi regime with genocidal ambitions such as Iran.

This intolerable red line that PSOE has crossed today is a shameful and unprecedented act, as it would be the first time that a country member of the EU includes in its government a party that does not guarantee the respect for and safety of the Jewish minority of the country, calls for the boycott against it and glorifies terrorism against Israeli citizens. In fact, it is the first time in Europe since the defeat of Nazism that a political party that promotes the destruction of the home of the Jews, and only of the Jews, gains access to power in a Western European country.

The hatred of Podemos against the Jews and against Israel is perfectly consistent with its proximity to the Islamist regime of Iran, which financed the formation of the party and today generously pays Iglesias and other members of Podemos for their participation in TV channels in Spanish of the Islamic Republic, like Hispan TV.

This irresponsible abnormality puts Spanish Jews in danger, so we call upon the international community to warn Sánchez of the serious consequences of his decision and of the scrutiny of his actions and those of his partners if the inauguration prospers.