It is a great pleasure for me on behalf of the Jewish Community of Madrid to welcome you in the capital of Spain.

Your historic trip takes place 25 years after the visit to Spain of the late President Haim Herzog who visited us in 1992 … a year full of symbolism for the Jewish People and for Spain.
A year that we wanted to forget for centuries … but that we must now remember in order to draw the new future of Spain and its Jews.
A future full of opportunities where the symbolic gesture of the Kingdom of Spain in granting the Spanish nationality to the descendants of the Sepharadim is very welcomed.
A future where the establishment of a world-class Jewish Museum of Spain in Madrid will contribute in fighting anti-Semitism and ignorance.

Dear President Rivlin, your visit is indeed filled with symbolism.
The Head of State of the Re-established Nation of the Jews returns to Spain on the Centenary of the Balfour declaration.
Your visit also takes place on the 100th year of the re-establishment of the first Synagogue in Madrid, the Midras Abarbanel, 500 years after the expulsion of the Jews.
Finally, we are also very proud that your visit to our Community today takes place in the Jewish School of Madrid … more than 50 years after its establishment.

Dear Friends,
Let me share with you that you are at the physical epicenter of Jewish Life in Madrid.
This unique school in Spain offers a full cycle Jewish education to its 330 students in an environment of tolerance, respect, excellence, solidarity and Jewish Identity.
It is international and diverse in its composition and intensely Zionist in identity.
We are particularly proud to have non-Jews among our students, who remind us of the importance of always being respectful to all «as we too dwelled in the past among strangers».

The Jewish School of Madrid, the Estrella Toledano is part of the Ibn Gabirol Center.
The combination of both of these names shed light into our aspirations as a Community.
Ibn Gabirol a famed Jewish Prince of the word and a light of glorious Sepharad.
And Estrella Toledano an unknown lady to many who arrived to Madrid from Casablanca, with a lifelong dedication to Jesed.

A wise thinker and a person of action.
Both these names, famed and unknown, both committed to the journey of the Jewish People indicate well our origins and values.
While we are small in size, as the largest Jewish Community in the Kingdom of Spain and living in its capital, we feel the responsibility of the legacy of Sepharad.
Spanish Jews are fortunate to live in a country that is Free, Diverse and Open.

Dear Friends,
The Jewish Community of Madrid is indeed undergoing a strong revival for the last decades. We have now 8 synagogues, a Jewish School, two cementeries, Kosher restaurants, constant tnuot of Sports and Culture and many organizations dedicated to helping Jews in need in Spain and in Israel.
We are constantly connected to the Jewish world at large.
We have a very strong pro-Israel voice, ACOM, that fights daily against the slander of our people and the Jewish state, and that punches well above its weight.

The Board of the Jewish Community of Madrid has dedicated itself to pursue UNITY among Jews. We make sure to provide Security and Education to all Jewish denominations in Madrid.
We know that UNITY is not only practical but moral.

Dear President,
Our Community is determined to being a loyal, productive and creative part of Spanish society. We know that modern Spain shares values and interests with the State of Israel.
Our Commitment to Israel´s well being is core to who we are and we feel that there is a clear new role for Communities in the Diaspora.
We are here to work in fighting those who seek to destroy the state of Israel through new means.
We are here to act as Ambassadors of Am Israel in this land to show the core values that the Spanish and Jewish People share.

Dear President,
Your visit takes place in a moment of deep importance in the History of modern Spain.
The constitutional challenge that took place days ago by those who believe in dividing instead of uniting has been met by the rule of Law and the examplary professionalism of Spanish Security forces.
Our Community stands firmly behind the unity of Spain.
Our loyalty to our constitutional order that guarantees the protection of all Spanish nationals irrespective of race, religion and gender is unequivocal.
Whilst the government of Spain, shamefully, not always has reciprocated in the international arena Israel’s friendship and loyalty, it is important that the people of Spain know that Medinat Israel stands firm supporting the Constitutional legitimacy that granted us Jews unprecedented integration and prosperity in modern times in this country. We, the Jews of Spain, as good citizens of this country and fervent Zionists, are proud to share those loyalties with total coherence and no conflict.

Dear Friends,
As Theodor Herzl prophesized more than a 100 years ago, «Zionism is an Infinite ideal. Even after we establish our land of Israel it will not cease to be an ideal. Zionism entails not only having a piece of land legally ours, but also for moral and spiritual integrity.»
Ladies and Gentlemen,
The Jews of Madrid are an integral part of the Zionist project and strive for that moral and spiritual integrity … with Israel at its core. We are committed to an Am Israel who stands at the forefront of the fight for Justice in the world, unafraid to challenge that which stands on the way of Human Freedom and Progress.
We know that modern Spain is a partner in that journey, and that Spanish Jews will play their role until the Prophecy of Ovadia takes place. 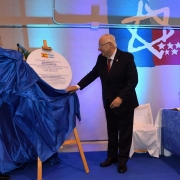 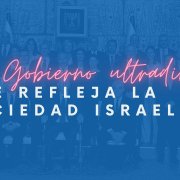