The City Council of Madrid once again puts public spaces at the disposal of representatives of the BDS campaign, already unmasked as being openly anti-Semite. In this way, the City Council is being an accomplice of a discrimination not only against the Jewish State but also against its citizens and its supporters in Madrid.

It is no surprise to see the presence of the third Deputy Mayor of the capital’s City Council taking part in this apology for discrimination, most of all bearing in mind the extensive jurisprudence to this regard on the illegality of the participation of City Councils in actions and declarations of boycott against the Jewish State.

Conference Movements of non-violent popular resistance against the Israeli Apartheid

Just a few months ago we denounced the celebration of an event which also was going to be attended by the third Deputy Mayor of the City Council of Madrid, Mauricio Valiente. Of no use were the prior announcements of protest and condemnation made by the Jewish Community of Madrid (institution that represents officially the Jews of Madrid), as they continued with the glorification of terrorists that murder Jews for the simple fact of being Jews, as well as the delegitimisation of the only Jewish State in the world.

Months later, the Conference Hall of the City Council hosted an event with similar characteristics and various participants. Among them, Ana Sánchez, presented in different forums as a representative of BNC (Boycott National Committee). The call to “no violence” was surprising, as they glorified terrorists and justified their actions using rhetorical acrobatics such as “armed resistance”.

Both events were attended by members of the Popular Front for the Liberation of Palestine, a terrorist organisation, called as such by the European Union and the United States. The criminal history of this terrorist group includes attacks with bombs, kidnappings and murders, targeting repeatedly the civilian population. In 1970 they attacked a Swissair civil airplane flying to Israel murdering 47 persons. The PFLP is also co-responsible, together with Fatah, of the Munich massacre in the 1972 Summer Olympics and of many other attacks. It is also responsible for the thousands of deaths caused by the conflict known as “Black September” in Jordan. The PFLP is opposed to the Oslo Accords, the two-state solution and, consequently, to the UN Resolutions and international law.

From ACOM, as Spanish citizens, we cannot but condemn the apology for terrorism, even more when it uses public spaces to delegitimise a democratic state, and only one, for the simple fact of being the Jewish State.

Unfortunately, although calling for “no violence”, what this type of events promotes is the delegitimisation of the State of Israel for being the “Jew among the nations”, taking us back to the prelude of the darkest episodes in the history of our Europe regarding the persecution of Jews.

For these reasons we hope the City Council this time stands by the victims of terrorism and condemns this act of anti-Semite incitement and hatred. 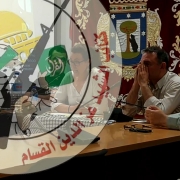 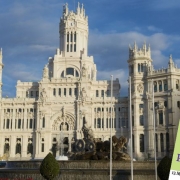 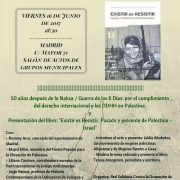 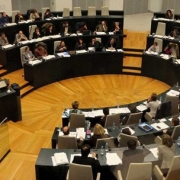