The recent revelation to the public opinion that Jaume Asens, Deputy Mayor of the City Council of Barcelona and a high ranking official of Podemos in Catalonia, was in charge of the defence and legal exculpation of a dangerous jihadist imam connected with the terrorist attacks of last week is joined now by the revelation that Benet Salellas, member of the Catalonian Parliament for the extreme left wing party CUP and parliamentary support for the President Puigdemont, has repeatedly acted as defence counsel for islamist terrorists in Catalonia. Also, both politicians are prominent anti-Israeli activists.

This situation shows again the cooperation and affinity between the murderers and some extreme left pro-independence political groups. Also, that the sad events that we recently lived and the worries of the Jewish Community of Barcelona are the result of a long and dangerous process of access to local power of extreme elements.

ACOM has been denouncing for years this intimate collaboration based on a network of associations that simultaneously promote anti-system, pro-independence and islamist activities. This constellation of groups in the orbit of Podemos-En Comú, CUP and sympathisers includes an obsessive anti-Semite fixation that is reflected in the initiatives taken from the institutions in which these political groups participate:

– The declarations of institutional boycott in the City Councils of Catalonia that ACOM has taken to the Courts of Justice. Motions that on repeated occasions have received the collaboration of ERC, a party of the coalition that governs the Generalitat.

– Official invitation to the commission of exterior action of the Catalonian Autonomous Parliament of individuals such as Raji Sourani, who has even served prison sentences for being a member of terrorist groups. Sourani does not hesitate in declaring that “Palestinian terrorists must receive a lifelong salary for their efforts”. On the other hand, in the same commission, the representative of the Jews of Barcelona, Uriel Benguigui, was called by the CUP a “foreign agent”. The President of the Jewish Community of Barcelona received the insults precisely from Benet Salellas.

– Homages in public forums, paid by the City Council of Barcelona, to terrorists such as Layla Khaled who have not renounced the use of violence nor have they repented from their terrorist activity.

– Approval of declarations of support to the boycott of Israel and the discrimination against all those who support it like the one made by the City Council of Barcelona, of which Jaume Asens is Deputy Mayor.

It so happens that Jaume Asens, apart from leading the defence of Mohammed Mrabet, in charge of the mosque of Vilanova i la Geltrú and accused in the Operation Chacal of preparing a serious terrorist attack, is also a furious anti-Israeli activist. He has an important presence in the broadcasting and activation of campaigns like “Rumbo a Gaza”, the Flotilla to Gaza, a legal pantomime that hides the acquiescence with the Hamas terrorist group. Asens himself boasts in his public curriculum of having leaded the legal cause that the terrorists of the flotilla tried against members of the Israeli Government and Army that was dismissed by the National High Court. 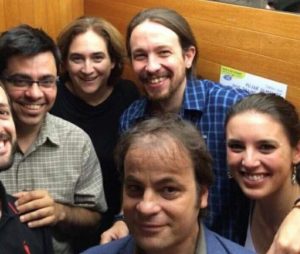 Jaume Asens with his companions of Podemos

The fixation of the Deputy Mayor of Barcelona with terrorism is not only restricted to Islamic terrorism, but also to the Catalonian terrorists of Terra Lliure, even doubting the Rule of Law regarding these convicts.

The same happens with the member of the Autonomous Parliament for the CUP, Benet Salellas, whose portfolio of professional preferences is wide in the terrorist spectrum: international jijadism, Galicia pro-independence activists, anarchists… up to five different terrorist groups. 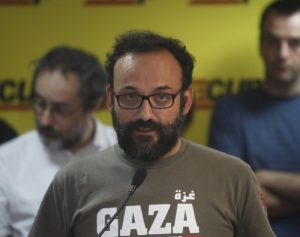 It is no coincidence that the BDS movement that Asens and Salellas support (and their political groups) is widely subsidized by public institutions, and that they emitted a shameful press release that blames Europe for the recent terrorist attack. Not only do they seek the disappearance of the Jewish State, but also they unashamedly glorify the terrorism suffered by the Israelis and in their macabre conception they despise the victims of the same jihadism we suffer in Spain.

This happens in the context of a region, Catalonia, with 515,000 Muslims, mostly recent immigrants, who represent 6.9% of the local population. This amount doubles the total percentage of Spain and would make an independent Catalonia the second country with the highest percentage of Muslim population in Western Europe after France (7.5%) and ahead of Germany (4%), Denmark (3.8%), Sweden (3%), Great Britain (2.8%) or Italy (2%). This percentage is even higher than that of countries with tumultuous situations as a result of their large Muslim population, such as Belgium (4%) with the Netherlands (6%).

This rapid process of Islamic penetration has also brought the accelerated expansion of the Salafi phenomenon in the Catalonian region, making it one of the largest Salafi hotspots in Europe.

ACOM wants to offer again its affection to the victims of the jihadist terrorist attack, to the citizens of Barcelona and to all the Catalonians, and its support to the national and autonomous governments and to the forces of law and order in their fight against the islamist terrorism.